I’m Emma. I was originally diagnosed in 2013 with triple-negative cancer in my left breast. Since then, I’ve had two other occurrences and am now on long term chemotherapy. Cancer has made me rethink my priorities, making sure I make the most of every day and telling the people in my life how much I love them because living with Cancer means you’re aware of your own mortality in a way that didn’t impact you pre-diagnosis.

You know when you half wake up in the night and your brain starts working even though you’re not fully awake? This happened to me one night in April 2013. My hand moved, seemingly on its own, to my left breast and upon feeling a large lump, I thought “that’s odd. Better do something about that in the morning” and went back to sleep unconcerned. My son was only 20 months old. There was no history of breast cancer in my family so thought perhaps it had something to with breastfeeding. The doctor referred me for a biopsy the following day. On the day I received the news, I remember sitting with my husband in the waiting room at St Margaret’s hospital in Epping (where we lived at the time) thinking “I’m sure it’s nothing…but what if?”. The doctor was very forthright as I’m sure he’d delivered the bad news to hundreds of women. I had a cancerous mass of about 4cm in diameter. I don’t remember too much from that point apart from leaving the hospital with a tear-stained face feeling embarrassed that people were looking at me with pity and the knowledge that I had clearly just received some very bad news.

Telling family and friends was hard. I knew they wouldn’t know what to say. What can you say? I felt guilty as I asked one of my friends to tell the others. But I just couldn’t face telling everyone. Dealing with other people’s reactions and emotions was not on my agenda at the time. I felt like my head was about to explode with all the worries about the future. I had a 20-month old son who, if this didn’t work, would be growing up without a mum! I pretty much run our home so my thoughts went directly to how my husband would cope even whilst I was poorly, let alone if ‘the worst’ did happen.

From that point, everything happened really quickly. Tests, scans, meetings, visits to the chemo suite in Harlow, and within three weeks of my visit to the GP I was having my first round of FEC-T chemotherapy. I had a wonderful head of long, thick curly hair at the time and the thought of losing it all horrified me! So I tried using the Cold Cap. I lasted three rounds before giving it up, persuaded by the nurses in the chemo suite and my mum that the discomfort I was feeling and the stress it was causing just wasn’t worth it. To this day, I can still feel the ice on my scalp and the sick, headachey feeling it gave me.

I had eight rounds of chemotherapy and I did lose my hair. I had it cut to shoulder length in preparation for it all coming out. When it started, I was in the shower and remember feeling and seeing handful’s coming out and within a very short time, on my son’s 2nd birthday, my mum cut it all really short and I started wearing headscarves and hats to cover the bald patches. I had many of the other delightful side effects chemotherapy gives you; nausea, severe lethargy, and tiredness, nails falling off, tummy problems, losing the sense of taste, and oral thrush being just a few. However, I did have this wonderful two-year-old little boy who was (and still is) the love of my life. He didn’t know or care about the sickness, stress and upset I was feeling.

So, life went on. It would have been easy to give in the tiredness but daily chores, dog walking, and everything that goes with looking after a two-year-old forced me to keep going. And I’m glad about that. I tried to keep life as normal as possible. My employer was very understanding and whilst I was able to carry on working for 2 out of 3 weeks each round, after about 12 weeks into the chemo, the side effects got too much and my employer suggested it was time to stop. Which was a relief. I felt guilty at having so much time off and didn’t want to admit defeat, but was glad she was able to put my well-being first, even if I couldn’t do that for myself.

My final chemotherapy was on 6th November 2013. The scans showed that the chemo had completely evicted ‘the squatter’ (a term I have stolen from a friend.) I had a lumpectomy which included axillary node clearance. Radiotherapy after that just to make sure. You would expect there to be a fanfare and celebrations of it all being over, with feelings of relief and excitement at life getting back to normal. It wasn’t like that for me. There was a weird feeling of abandonment. After all the fuss, regular visits to various health professionals etc, that was it. All over with. Eventually life started to return to normal, even with Lymphodema developing in my left arm.

In 2017, having moved to Northamptonshire in 2015, the results of a follow-up mammogram revealed another mass in my left breast which meant a mastectomy. I had more chemotherapy which made me quite poorly and was stopped early as a result. Once again, I had got through it all. People telling me how brave I had been. I didn’t feel it. I just wanted to cry all the time and did quite often. I was put on Tamoxifen as there was a chance it might stop ‘the squatter’ from coming back. It didn’t.

In early 2019, having a check-up with the surgeon, another lump was found. This time in my right armpit. I had been checking but the position of it was deep and I couldn’t feel it unless my arm was in a particular position. I couldn’t believe it! No one could tell me why it kept coming back. I was terrified and furious (at no one in particular) that all the drugs and procedures I had been through and it was still coming back! Who survives cancer three times??

When I went for a scan, I got talking to another cancer patient who had read about diet helping to eliminate/control cancer sometimes. I followed this up with my own research and reading feeling better that there was something I could do something to help myself. I knew I would be recommended more chemotherapy and was once again dreading the horrendous side effects and unconvinced it was doing me any good. I wasn’t sure I could go through it all again. I was so tired of it all.

After the lump was removed with yet more surgery, the oncologist suggested long term chemotherapy. I wasn’t happy about this but thought I should give it a try. If it makes me poorly where my life is impacted, then I’ll stop. Receiving a copy of the letter sent to my GP sent me in a spin as I read the word ‘palliative’ when explaining the current chemotherapy plan! I had only heard this term used when referring to ‘end of life’ patients and had to read up to stop my panic!

I still suffer from “chemo brain“. I get tired and irritated quickly (especially when people moan about, what feels to me, like trivial matters). My memory is shockingly bad. My poor work colleagues can testify to that! I cry really easily – more so than before I had chemo and not just because the future terrifies me. My body is a mess of scars and weird shapes. My ‘lymphy’ arm is about 35% larger than the right and getting tops and jackets to fit is beyond annoying, but the lymphedema service has been wonderfully supportive and it’s a manageable condition. I have wonderful family and friends who help me live my best life. My son is now nine and is still my main motivation for getting up and enjoying every day.

I don’t take life and good health for granted. I changed my diet. I am now plant-based (almost exclusively) and only have sugary things as treats every now and then. The more I read, the more I feel that the foods I eat and my emotional wellbeing will help my recovery in more ways than one. The chemo I am now on isn’t too bad. The side effects are minimal (at the moment) and manageable. It’s the blood tests I dread! My poor veins just don’t want to cooperate!

I don’t let my scars or illness stop me from doing anything. I know that my ‘squatter’ is zipping about my Lymphatic system, waiting to put down roots again and this time it could be anywhere. I still cry often and am frightened about leaving my husband and son before I’m ready. But I enjoy my life. I don’t waste time or opportunities to have fun and enjoy time with the people I love. I’m still fighting. 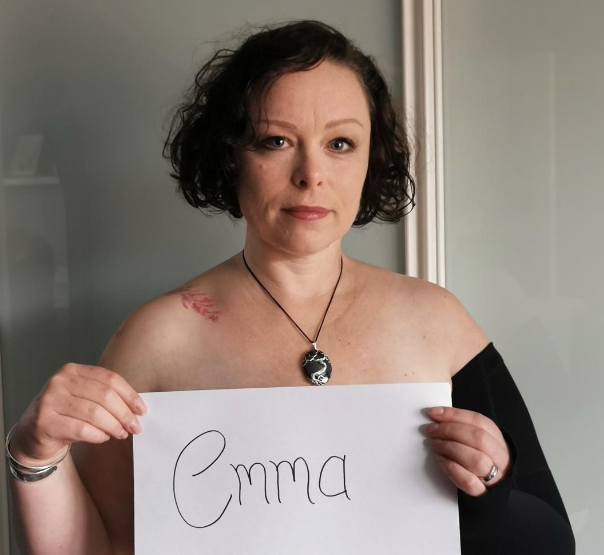